We approached Bupa who was the current owner of the Camellia Grove site in St Ives, knowing these camellias have had a long history in the area and were in great need of care. We offered to save as many as we could, with the understanding that when they finish their project we would re-plant back twenty. We were  able to save approximately ninety

We are given the go ahead, not an ideal time as camellias are about to throw their new growth, but demolition of site was going to happen in December so it was now or never. We needed a large excavator to dig these out, so we cut down each side & then under with the bucket, before hand cutting the camellia back to approx. 1.5mtrs high. In some cases there wasn’t a leaf left on the bush. Once lifted out of the ground, we trimmed the root system into a manageable size as we will plant these into grow bags. We transported these bare rooted back to our nursery in Glenorie & proceeded to plant into 750 litre bags, 30 cubic mtrs of high grade camellia soil mix was used & we housed these under a shade house structure. 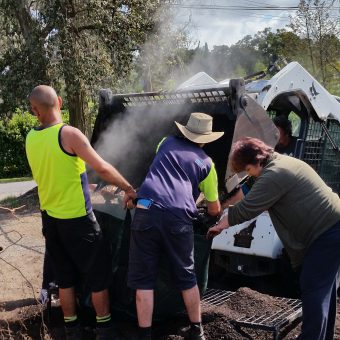 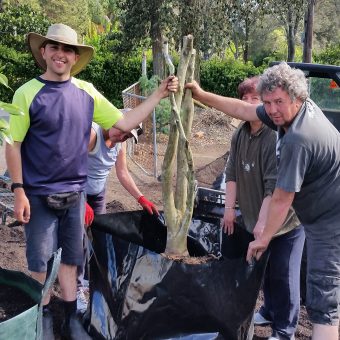 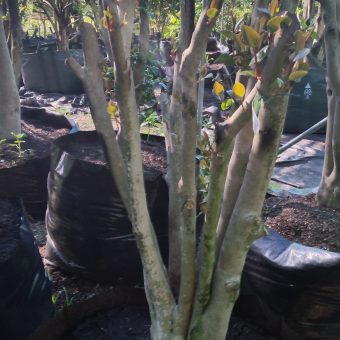 We started with a fortnightly watering of  Maxicrop root hormone solution, there were no signs of growth for months, late December we were looking closely at the stems and to our amazement there were little growth eyes coming from the stems a great relief.

We applied a half a bag of composted cow manure around each, then applied some slow release fertilizer.

Growth  happening all over, dark green new growth no signs of mite or scale.

All nice growth and very little  flower as expected.

We  re-locate out of the shade house into a more sun & light position, so as to promote more growth.

We have some fantastic growth & are able to propagate from this approx. 10,000 cuttings.

Very hot some burn on  foliage

After a very hot summer, conditions very dry , we are on the verge to having a great season of flower with our Japonicas

Shipping is based on price per box. Up to eight 5 inch (125mm) Plants are allowed per box.
For large wholesale trade orders we have several transport companies and options available. Please phone 02 96522879 and ask for Bill Parker to discuss. Dismiss